Detroit – Today, Detroit Future City (DFC) released “139 Square Miles,” a comprehensive citywide data report on Detroit that is the first report of its kind by the organization since the 2012 release of the noted “DFC Strategic Framework Plan,” a 50-year vision for the city. This new report shows that, for the first time in 60 years, Detroit is moving toward population growth, with the economy on the rise and neighborhoods beginning to stabilize.

The “139 Square Miles” report compiles the most recent, credible and accurate data to provide an authoritative snapshot of Detroit, focused on people, population, economy and place.  The report was funded by the John S. and James L. Knight Foundation.

“Detroit Future City aims to advance the city’s transformation through providing equitable and accessible resources, best practices and data,” said Anika Goss-Foster, DFC’s executive director. “Transformation happens when we are all working from one common and trusted set of information, and this is what ‘139 Square Miles’ provides.  It is our hope that through this report, the city can maximize its success, start to close the gaps and catalyze opportunities for growth.”

“139 Square Miles” illustrates where Detroit, a city of 672,795 people, has experienced significant progress, particularly in the last five to 10 years.  Population continues to decline in Detroit, as it has for the past 60 years, however the rate of the decline is slowing. Notably, population growth among millennials has increased by 10,000 since 2011, a positive sign for the city’s future.  Having a growing younger population that will build their lives and families in Detroit speaks to a positive long-term future for the city’s growth.

The report shows that the city’s economic development efforts are also yielding results. Detroit has re-emerged as a significant contributor to the region’s economy, with payroll at firms in Detroit showing a 42 percent increase, which is 50 percent more than the national average. Employment numbers are up in the city, and jobs are becoming available in not only the tech fields, but manufacturing jobs are returning to the city, as well. More than half the jobs in Detroit pay more than $40,000. The city has experienced a 5 percent increase in its population to jobs ratio, which is a faster growth than many other cities, though the number is still low by comparison. The city is also leading the region with 1,076 new residential units permitted in 2016.

“We need to focus efforts on growing wealth within the community, while attracting families who can live and work in Detroit, to reverse the trend of the declining middle class,” Goss-Foster said.

Though growth is evident, “139 Square Miles” identifies areas where gaps still exist and, in some cases, are growing wider.  The report shows increased disparity for minorities, specifically in the areas of educational attainment, access to jobs and economic advancement.

“Where there is growth, there is opportunity.  It is incredible to see Detroit resurge in key areas such as the population and economy. It’s now important to think about how we continue to steward this growth in a manner that provides opportunities for all Detroiters, whether it’s access to jobs or diverse housing options,” Goss-Foster said.

Only 20 percent of Detroiters have an associate’s degree or higher, which makes it more difficult for the city’s residents to find higher-paying jobs. Additionally, the unemployment rate is 150 percent higher for African Americans than white residents.  The City has developed great programs to combat these challenges, such as the Detroit Promise and vocational training, and “139 Square Miles” makes it clear that we need to expand those programs even further.

The lack of income for residents leads to issues such as housing affordability, and nearly 60 percent of renters in the city spend a third of their income or more on housing.

The report shows the need to better understand and address accessibility to capital and growth for minority-owned businesses.  The city’s African-American and Hispanic entrepreneurs are about half as likely to move from self-employment to hiring workers. There are programs to support minority entrepreneurship development in the city, and these programs need to be expanded and shared more widely.

In the last 10 years, mortgages in Detroit dropped from 8,300 to 658. This trend is starting to reverse, helped by the introduction of programs such as Detroit Home Mortgage and renewed interest in the city’s neighborhoods. Stabilization is beginning to occur in neighborhoods outside Downtown and Midtown, such as Southwest, Bagley, West Village and the University District. However, tax foreclosures continue to be a considerable problem and are a step back as Detroit is trying to move forward.

“There are great programs in the city that are starting to address these inequalities at a systemic level. With the substantiated data in this report, we will be able to better assess how to deploy resources in the near term, so we can hopefully track progress and improvement in the future

As with many issues facing the city, where others see problems, Detroit Future City sees opportunities,” Goss-Foster said.

The Knight Foundation’s funding for “139 Square Miles” reflects its mission to inform and engage communities, which the organization believes is essential for a healthy democracy.

“To build on Detroit’s momentum for positive change, we need to examine and assess the realities facing our city and work together using a common set of facts,” said Katy Locker, Knight Foundation program director for Detroit. “The report provides open, accessible information on the state of Detroit, charting a way forward for growth, economic development and greater civic engagement.”

The methodology for “139 Square Miles” involved using data from several sources, including the American Community Survey (ACS).  Detroit Future City chose to use the ACS five-year data to have a consistent comparison across geographies.

“Some of the data may not reflect the immense progress that has occurred in the last couple of years.  But, we want the reader to know two important things: The data provided in ‘139 Square Miles’ are the most recent data available, and accuracy and consistency were our top priority,” Goss-Foster said.

The “139 Square Miles” report is available in print and online at www.detroitfuturecity.com/tools.   DFC distributed the book to Detroit’s stakeholders nationally and locally, including to community organizations, the City’s district offices and Detroit Public Library branches, to make sure that all Detroiters have access to the report.  Detroit Future City is using the hash tag #DFC139 on social media. 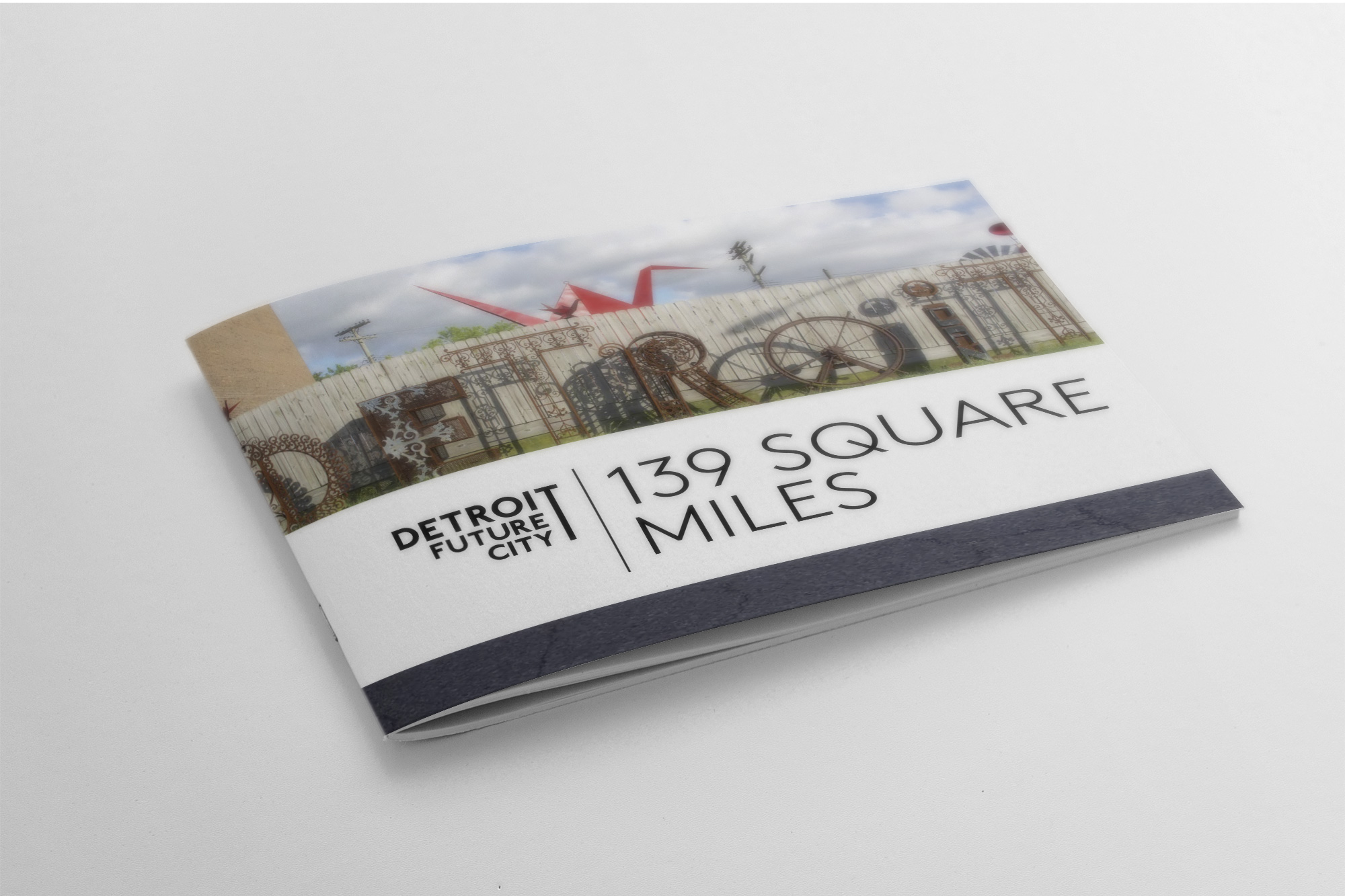