Due to its long-standing fiscal challenges, Detroit has broadly underinvested in its transportation system as well as its supporting technology infrastructure, putting the overall system at a tipping point with regard to its future direction. The current system is oversized, inefficient, and underperforming, with too many Detroit residents, especially the estimated 20% of the city without access to an automobile, suffering from inadequate access to jobs, health care, school, and daily goods and services. As Detroit moves beyond bankruptcy and focuses resources on addressing its significant transportation challenges, the city has the opportunity to test and pioneer innovative approaches to mobility. 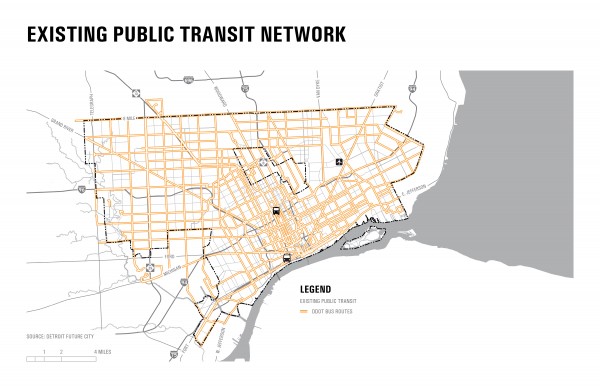 The Detroit Future City Strategic Framework provides one vision for reconfiguring transportation to increase citizen access to employment and services in a way that is both effective and affordable. Released in January 2013 following input from public, private, philanthropic, non-profit and community members, the DFC framework proposes the adoption of a tiered transportation system with: 1) regional express services (including bus rapid transit) connecting employment centers and critical destinations in the metro area; 2) crosstown routes connecting Detroit neighborhoods to each other; 3) feeder services linking neighborhoods to express routes; and 4) new micro-transit and on-demand services providing transit services to residents in higher vacancy areas with increased efficiency and lower cost than traditional full-size, fixed route services. 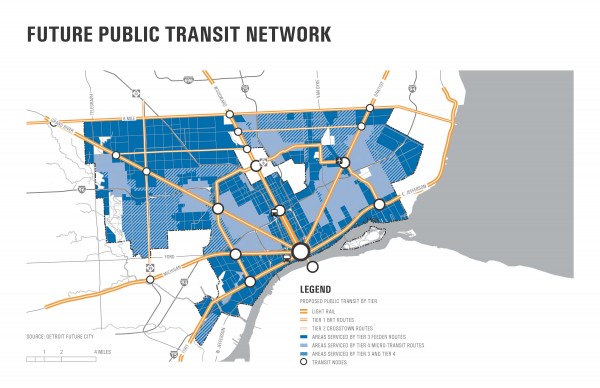 Recent improvements to the transportation system provide reasons for optimism, with innovation coming from both the public and private sector: the creation of a Regional Transit Authority; final design and funding for the M1 Rail streetcar linking the innovation hubs of downtown and midtown; alternatives analysis for bus rapid transit on Woodward Avenue; new Mayor Mike Duggan’s renewed focus on getting Detroit’s buses moving and on-time; entrepreneurial efforts such as the Detroit Bus Company’s airport express service pilot and after school Youth Transit Alliance program; and growing support for non-motorized transportation modes through initiatives such as the Dequindre Cut Greenway expansion and grassroots efforts such as Detroit Bike City’s increasingly popular Slow Rolls. These projects, along with a resurgent economy and growing transit advocacy, show Detroit’s potential to realize fiscally sustainable, strategically coordinated, high-performing transportation options.

But Detroit may only be scratching the surface of its potential. Technological innovation could provide the opportunity to integrate and expand new and existing transportation options in ways that improve mobility, mitigate cost, and thereby sustain an improved quality of life. With support from Code for America Fellows, the City launched the Text-my-Bus app in 2012, providing riders the means to track their bus in real time. With the arrival of a new Chief Information Officer and support from a White House Technology Team for opening the city’s data, Detroit has the opportunity replicate this effort at scale and across modes by leveraging its burgeoning technology community to develop new means of improving its service delivery and connecting its various transportation modes in new ways that allow residents of all income levels to seamlessly connect from car to bus to rail to work.

Given the current state of Detroit’s transportation network, significant improvement may appear distant if not possible, but if the Motor City is willing to pilot new approaches and adopt best practices in mobility, Detroit could become a model for affordable 21st century transportation in the same way Henry Ford and the Model T shaped the last.

Chris Dorle is a Strong Cities, Strong Communities Fellow serving the Detroit Future City (DFC) Implementation Office as convener of the City Systems Working Group. This post is part of the Meeting of the Minds Group Blogging Event on the topic of connecting residents to economic opportunity. For more about the Meeting of the Minds event, please visit: http://cityminded.org/urban-opportunity/